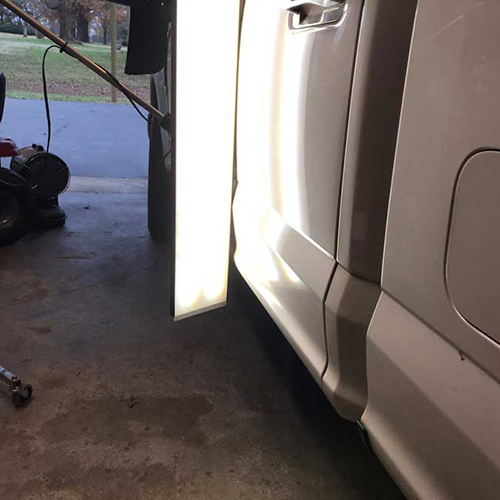 Dent Ding Hail Pro is a  Paintless Dent Repair Company  in the paintless dent repair industry. We have performed dent repair thousands of dented and hail damaged automobiles. We offer dent repair in Franklin, TN. We also service many other regions surrounding the Franklin TN area.

We have many reviews and testimonials from happy dent repair customers on the web! You can find testimonials on Google, Yelp, Facebook, Angie’s List, and PDR Nation. We have an A+ rating with BBB.

We have many before and after dent repair videos and pictures on our website. We also have a youtube channel. You may view at the following link https://www.youtube.com/channel/UCpwu9bEfFmWJUeUfKZKRFSw

There are several ways to receive an in general free estimate for my customers in the Franklin, Tn area. Receive a general free estimate by taking several pictures and texting it to 931-215-1251. Take one picture at a 45-degree angle standing 6 feet back and another picture standing 3 feet back. In many cases, we can give you a general ballpark estimate by phone after reviewing your pictures. Some dents and dings do require an in-person look. If the vehicle requires in-person look, we may be able to come to you in Franklin,TN or make arrangements to meet at a convenient location. The goal is to get you a free estimate in an easy way. Note: Hail damaged vehicles require on-site inspection.

Joe Richards has received the highest rating possible with Vale National, PDR Nation, and ARC. Vale National, PDR Nation, and ARC has testing processes in place that qualify technicians in the paintless dent repair industry. We have an A+ rating with BBB. Joe Richards is also a member of NAPDRT. You may also check our reviews and testimonials from individual customers on the web. See our reviews tab.

No comments to show.